This model was developed in 1983 by the International Standards Organization (ISO). This was the first step taken to standardized the international protocols used in various layers. As it deals with connecting open systems, that is, systems that are open for communication with other systems, the model is called the ISO-OSI (Open System Interconnection) Reference Model.

OSI is a layered framework designed for network systems. Due to this model connection between all types of a computer system is possible. It has seven separate layers but each layer is related to each other. Each layer describes a part of the process of transferring data across a network.

This is the OSI model. 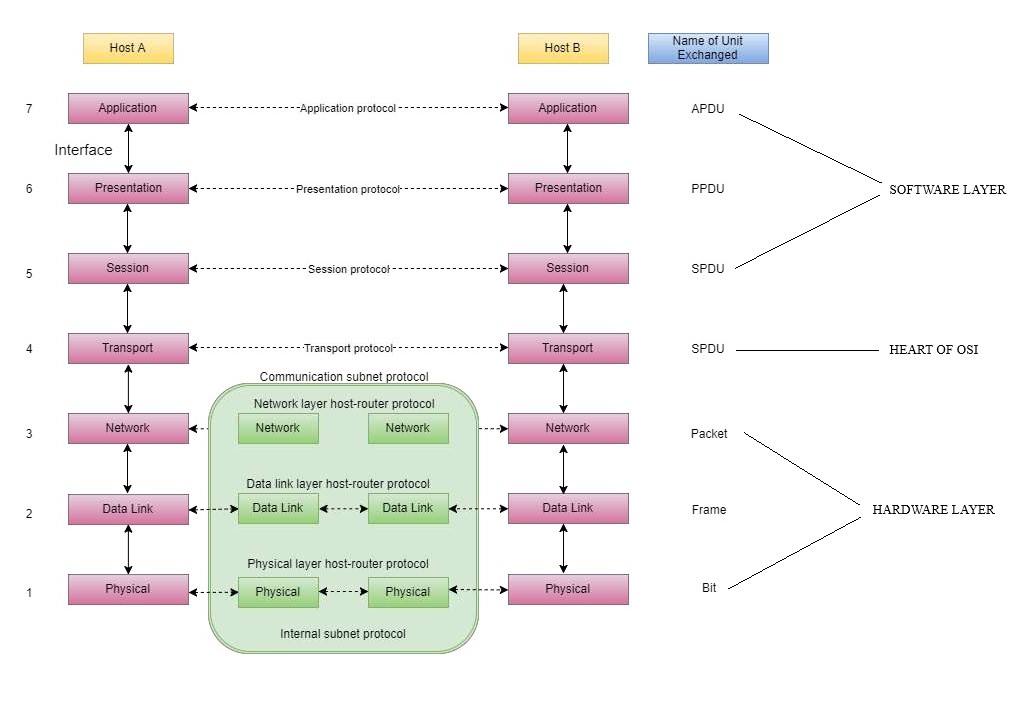 The OSI model has seven layers. The function of each layer is given below:-

It is the lowest layer of the OSI model. The physical connection between the devices is possible due to this layer. Information stored in the physical layer is in the form of bits. Individual bits from one node to next are transmitted by with the help of this layer. The data received by this layer is converted into 0s and 1s and it is transferred to the Data Link Layer.

Function in the physical layer of the OSI Model

The node to node delivery of a message is possible due to the data link layer. This layer makes sure that the transfer of data takes place error-free from one node to another, over the physical layer. In a network when a data packet arrives, the data link layer is responsible to transmit it to the host, using its MAC address.

This layer is sub-divided into two layers:

Depending on the frame size of NIC(Network Interface Card) the packets received from the network layer are further divided into frames. To get the receiver’s MAC address, a request is placed by the sender by sending the IP address whose MAC address is required and in returns gets the destination MAC address.

Function in the data link layer of the OSI Model

The delivery of packets across multiple networks(links) from source to destination is the responsibility of the network layer. The network layer is not needed when both the systems are connected to the same link. Although, when two systems are connected to the different networks, this layer is required as it achieves the transmission of data from one host to another. Networking devices such as routers are used to implement this layer.

Function in the network layer of the OSI Model

Following functions are performed by the network layer:

Function in the transport layer of the OSI Model

Functions of the transport layer are as follows:

The establishment of connection, maintenance, synchronization, and termination of connection is the responsibility of this layer. This layer also ensures the security of connection and authentication.

Function in the session layer of the OSI Model

The functions of the session layers are:

The presentation layer ensures that communicating machines can interoperate properly.  The data received by the receiver should be understandable and it is the responsibility of this layer. If syntax between the two communicating users is different then this layer operates as a translator.

Function in the presentation layer of the OSI Model

The following functions are performed by this layer:

At the topmost layer of the OSI model, this layer is implemented by the network application. This layer allows the user to access the network. The data that has to be transferred over the network is produced by these applications. The UI (user interface) and maintenance for services such as e-mail and remote file access control are implemented through this layer.

Function in the application layer of the OSI Model

The functions of the application layer are:

The late invention of the OSI Model is the reason it is not implemented on the internet and is used just as a reference.