How to Create a new Repository on GitHub

In the last tutorial, we have learned how to make use of Git clients if you are not comfortable using CLI. Now we will learn how to create a new repository on GitHub. Creating a new GitHub repository is very easy and can be learned easily.

Now in this tutorial, we will guide you on creating a new GitHub repository. You can create a repository at github.com by following the below steps. 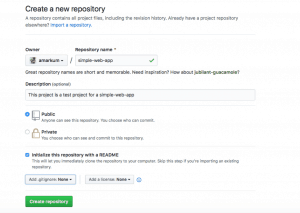 Give Repository a simple name, say simple-web-app.
You can provide a description of the repository which you are creating, though this is an optional field.

Also, you can choose to make the repository either

For simplicity, let’s skip creating README and .gitignore for time being.
Hit “Create Repository”, a repository will be created.

The repository will then be allocated a URL and will store all the source code.
The pattern of the URL follows

To be able to clone the project into different machines, we will use git clone command.
But first, let’s put our skeleton code into it.

Open a “Terminal” in Mac or Unix, or in Windows using Command Prompt.

Navigate to the skeleton project, and initialize it as a git managed the project by typing.
Make sure you are inside the project folder.

when we did “ls” to the file, it only enlisted index.html.

After a git init, it has created a hidden file called .git, which will maintain the state of git files and the branch.

We’ll discuss more on the branching in Upcoming tutorials. The intention of the current tutorial is to show how Git manages different states of the code files.

Let’s tell git to add up all the new/updated files to be able to push to GitHub.
Either we can specify file one by one or simply use “.” to represent all files.

(. is used to specify all files)

Now, we need to commit what changes that we have denoted git to do.
Every commit that we do, has a message which denotes, what was changed.
Since we added all the files to be able to push to GitHub
We commit these changes with a message by

To push the changes, we need to execute the below command

origin – origin is a repository location where the code will be uploaded or pushed.
master – git maintain different branch, the master is the main branch, where we want the code to be pushed.

Since there is no origin set, we need to set the remote origin first.

The URL is the location, appended with “.git” at the last.

In a nutshell, run the below command to push the local files to remote.

The first time, you will need to enter the ID and password for GitHub.
Once set, it won’t ask for the password again.

Below you can see, our skeleton project’s file is added to the project.

As you can see, the commit message is displayed with the username in GitHub Webpage.
We can configure the username and other attributes, which will be discussed in subsequent tutorials.