As discussed earlier, Git is a set of tools which is used to manage code at GitHub Repository. So, we will be required to create a repository at first, where all our source code will be stored to be able to manage it.

But before this, we must have a visual idea about how git works.
Presented you below a diagrammatical representation to understand things better, and develop a good understanding of using git.

Git – General Workflow
1.) Creation of a new repository for a project at github.com, which stores all our source code.
2.) In our local machine, which has git Installed, we make our skeleton project folder, say (simple-web-app) as a git managed folder.
(If you already have a fully-fledged project code, you still can initialize it as a git project to be able to manage it with git.)
3.) We upload/push our code to the freshly created repository.
4.) Once, the code is hosted on GitHub Server, we can copy /Clone it in different machine, make changes in different machine, submit changes and merge them all together. 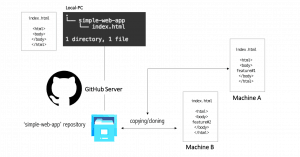 Conclusion
Easy as it sounds, git has a number of useful commands on how we can manage, work on different features, add/remove code, use these codes at GitHub server to create a fresh release/version etc. and that’s what git is all about, which will be covered in the subsequent article. Once you learn using git, programming becomes much simpler, because you have a backup of every little thing that you made changes to and you can restore it, when it doesn’t seem to work, Stay Tuned.