Recursion is simply defined as a function calling itself. It uses its previously solved sub-problems to compute a bigger problem.

It is one of the most important and tricky concepts in programming but we can understand it easily if we try to relate recursion with some real examples:

Think of a situation when you put a mirror in front of a mirror? 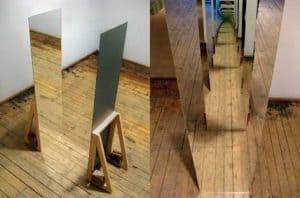 This is exactly what recursion does.

If we define a function to draw a triangle on its every edge. Can you imagine the resultant figure?

In both the above examples we saw the never-ending sub-problems (the mirrors will keep reflecting one another and there appears to be an infinite number of mirrors and in the second example, the figure will keep growing infinitely).

By this, we understand the need of having an end condition for every recursive function which will avoid this infinite structure. This condition is known as Base Case.

Let’s  try to understand it with an example:

When a function is called, it occupies memory in the stack to store details about the execution of the function. And when the function ends, the memory occupied by it is also released. Now in recursion, as we know a function is called in itself. Hence at every function call, a block of memory is created in the stack to hold the information of the currently executing function. When the function ends, it returns to it’s calling statement written in the outer function i.e., an outer function is resumed from where it stopped. Let’s see the memory structure in the above example for n=3: 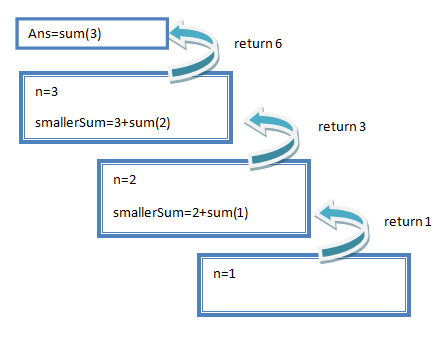 Keeping the association of recursion and stack in mind, we can easily understand that in absence of Base Case, our program will suffer with Stack overflow and time limit exceeded.

Difference Between Direct and Indirect Recursion

The code structure of the Indirect Recursive function:

When to use recursion over iteration

Both approaches have their own pros and cons, hence it becomes necessary to understand which one should be used to solve a particular problem.

Recursive is a more intuitive approach for solving problems of Divide and conquer like merge sort as we can keep breaking the problem into its sub-problems recursively which is sometimes difficult to do using an iterative approach, for example, Tree traversal(Inorder, Preorder, Postorder). But it is also true that the iterative approach is faster than recursion as there is no overhead of multiple function calls.

Note:To solve a problem we can use iteration or recursion or even both.

Let’s try to solve another question:

Stay tuned and check out the other blogs too. Comment down for any corrections/suggestions.