In this tutorial, we will understand the differences between C++ and Java along with similarities in C++ vs Java with example. Both are object-oriented programming languages.

C++ is a programming language that is derived from C. Earlier C++ also had the name “C with classes”. This is because C++ was the first language to introduce classes and objects and also inherits all the properties of C. It also uses the support of SIMULA-67 (the 1st Object-oriented language). We mainly use C++ for application and system development. The founder of C++ is Bjarne Stroustrup.

Java is a pure object-oriented programming language that runs on a virtual machine. It is more secure and portable. It also has an interpreter and we mainly use it for application development. The founder of Java is James Gosling. The initial name of Java was OAK which was a failure. Later, it was acquired by Sun microsystems and now by Oracle corporation.

Similarities of C++ vs Java

Even though there are differences between C++ and Java, there are similarities as well.

Execution: Both are similar in terms of the execution process. The compiler converts the source code into machine code. Additionally, Java has an interpreter which uses the JVM for the execution of the compiled code. 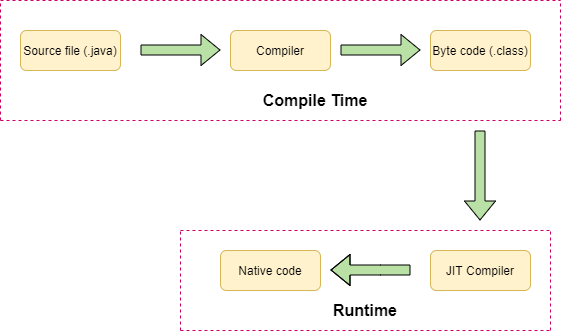 Features: Both languages support many features of the OOPs concept. But still, there are few features that one language supports and the other does not. Below is the comparison of the feature support between both languages.

Differences between C++ and Java

Below are the differences between C++ and Java.

Example of a simple C++ program

Below is a simple C++ program that prints the text “C++ programming language”.

Example of a simple Java program

Below is a simple Java program that prints the text “Java programming language”.