This tutorial covers the overview of multithreading in Java (Concurrency in Java) and the differences between multithreading and multiprocessing. Before we go into detail about multithreading, let us understand what is a thread.

A thread is a lightweight process or the smallest unit of a process. Every process can have multiple threads that execute different tasks. There are different ways of creating a thread that we will understand in detail in the next tutorial. A thread is of two types: a user thread or a daemon thread. Whenever we create a new application, it creates a new single thread after which we can create multiple threads of any type.

Now, that we know what is a thread, let’s see in detail about multithreading Java and concurrency. 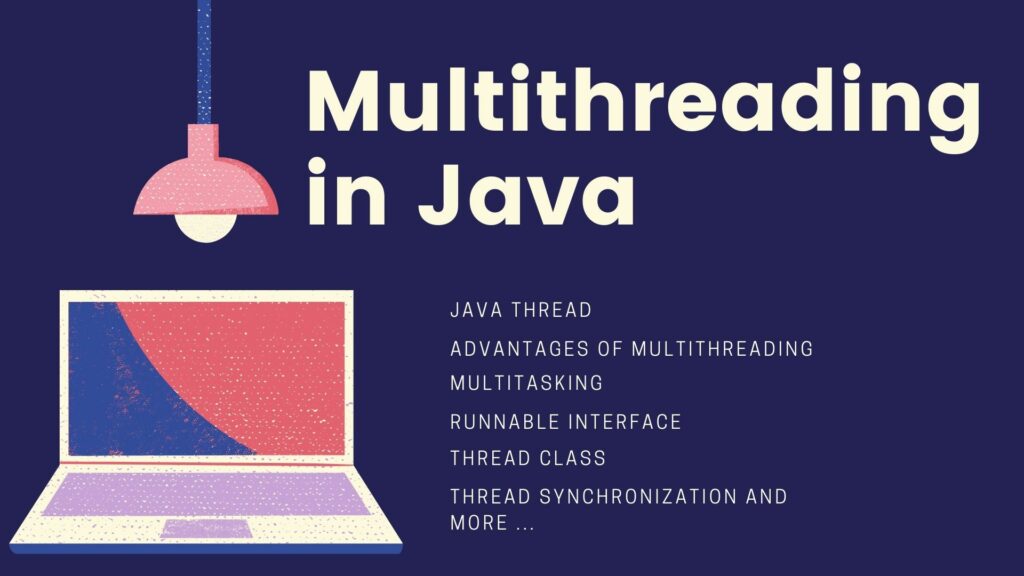 Multithreading in Java (Concurrency in Java)

When we execute multiple threads at the same time, we call it Multithreading. In other words, we can say it is a Java technology that allows multiple parts of the program to perform simultaneously. This results in maximum CPU utilization. We can also call it concurrency since it executes two or more threads concurrently. In the multithreading process, the threads run in parallel and it is easy to switch between the threads. Multithreading saves memory as it does not allocate separate memory for each thread.

We can implement multithreading concepts using the classes present in the Java concurrency package java.util.concurrent.

Multitasking means executing multiple tasks simultaneously. This means, it shares the single CPU across multiple tasks and switched between the tasks whenever required. There are 2 types of multitasking:

In multiprocessing, every process has a separate memory allocation. Each process is heavy-weight and hence switching between processes is very time-consuming. Hence communication between them is also very high.

In multithreading, multiple threads share the same memory. Each thread is a lightweight process and hence communication between threads is low.

The below diagram illustrates the concept of multiprocessing and multithreading. 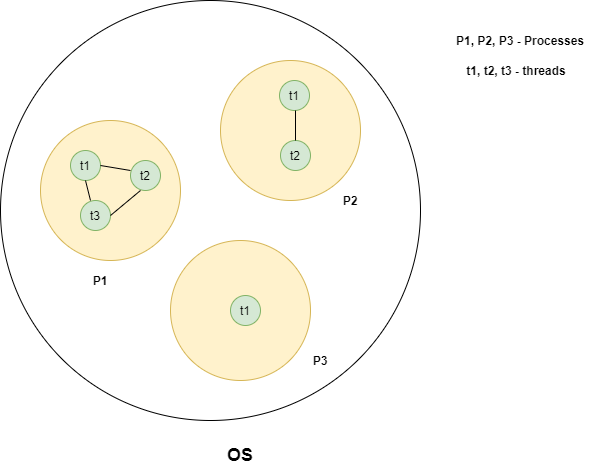 We can create a thread in two different ways. Both the methods override the run() method.

Thread States/Lifecycle of a thread 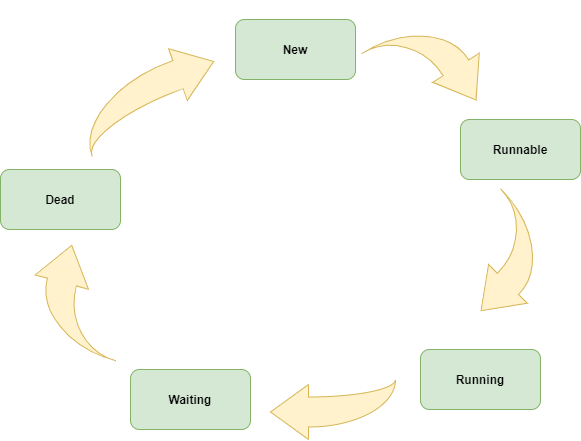 A simple example of multithreading in Java (Concurrency in Java) 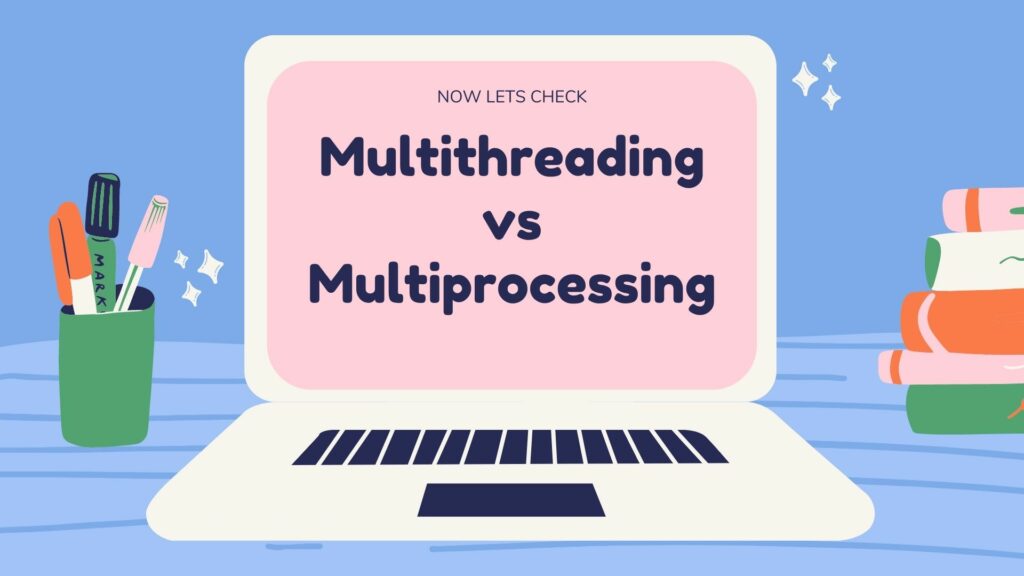 Multiprocessing vs Multithreading in Java

In Java concurrency, a lock is an important concept to implement synchronization. When 1 thread is using a shared resource, it locks it until it completes the execution so that other threads don’t access it. Hence it is necessary to obtain the lock status of a shared resource. We can obtain this information or implement it using the 3 methods of the Object class which is wait(), notify() and notifyAll(). The wait() method puts the thread into a waiting state whereas notify() and notifyAll() methods wake up the threads from the waiting state to resume the execution.

Java supports the concept of multithreading and hence there are chances that it may lead to data inconsistency. This is because multiple threads share the same resource and hence thread safety is a very important topic. Thread safety and synchronization need to be handled since the operations performed using threads are not atomic in nature. There are different ways to make Java program thread-safe which we will see in upcoming tutorials.

Java memory model is an important concept that we use to understand how to design concurrent programs correctly. It depicts how the JVM works with the RAM(Random Access Memory).  This memory model takes care of the thread synchronization and allows the threads to know when and how the threads have written values to the shared variables. The Java memory model contains both Thread stack and heap memory where every thread maintains its own thread stack.

Java exception in the main thread

In any Java program, the first thread that the JVM creates is the main method. Sometimes the main method can throw an exception which we need to handle accordingly. We will understand the various exceptions in the main thread and how to handle them in a separate article. 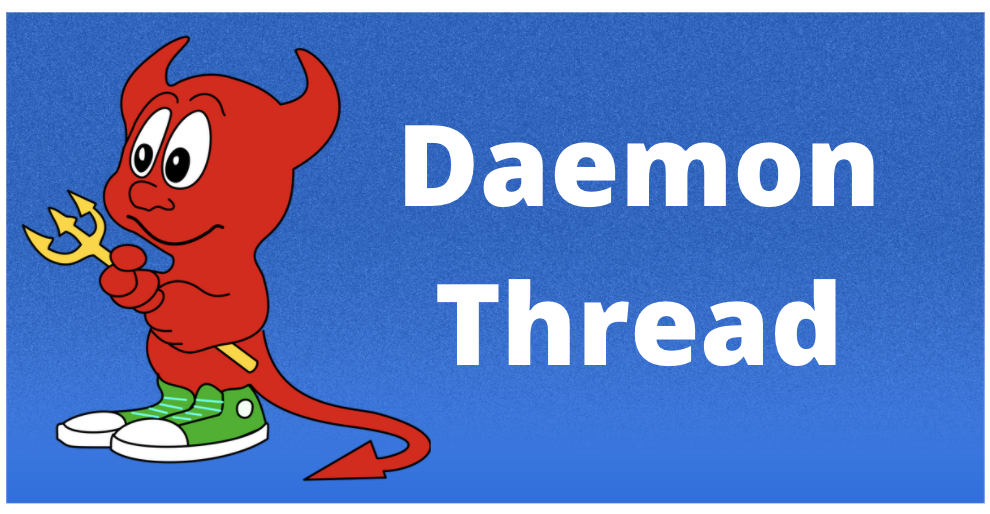 Daemon thread is a type of thread that executes tasks in the background. It destroys the daemon threads automatically when all the user threads are completed and terminates the program. I will cover in detail Daemon threads in a separate article.

Thread signaling allows threads to send signals between the threads for better communication. It can also enhance the thread communication by sending signals informing whether the thread has to wait for some process to complete so that it can utilize it.

We can use the Java Thread dump to retrieve the thread details and information. This helps in a multithreading environment to analyze the performance issues with the applications. It also helps in identifying and fixing deadlock situations. This article details different ways to generate thread dump.

A Thread pool is a group of threads waiting to process a job. We can create a thread pool using the Java Executor framework that has the Executors and ThreadPoolExecutor classes. This concept was introduced from Java 5.

Every thread has a priority which is an integer value between 1 and 10. In many situations, the thread scheduler picks up the threads for processing the tasks based on the thread priority. There are 3 different constants defined for thread priority: MIN_PRIORITY, NORM_PRIORITY, MAX_PRIORITY.

Next, we will see what are the main components that are part of the Java concurrent package java.util.concurrent

Executor interface executes a specific task. Based on the implementation, it decides whether to execute the task on the new thread or the current thread.

ExecutorService is used for asynchronous processing. Based on the availability of the thread, it schedules the submitted task. We use the Runnable interface to schedule the task.

ScheduledExecutorService schedules the tasks periodically without any delay. This means it executes the tasks instantly. We can use the Runnable and Callable interfaces to define the task.

Future provides the result of the asynchronous tasks. We can use this interface to retrieve the computed result, check if the task is complete or not.

CountDownLatch is a utility class that is part of the JDK 5 package which makes the threads wait until some other operations are completed. It generally has a counter which is an integer value that decrements automatically as and when each dependent thread completes the execution. When the counter value is 0, it releases all the threads.

CyclicBarrier is similar to CountDownLatch except that it allows multiple threads to wait and supports reusability. We can define the task using the Runnable interface.

Semaphore is used to block the thread access to critical sections. Before the thread enters the critical section, it checks whether the semaphore has a permit or not. If there is a permit, it allows the thread to enter else it will not. It contains a method to check the number of available permits. Semaphores can also be used for thread signaling.

ThreadFactory is a thread pool that helps to create a new thread based on the requirement.

BlockingQueue is useful in asynchronous scenarios where there is a producer-consumer problem which is a serious issue in the Java Multithreading environment.

DelayQueue is a BlockingQueue of infinite size. This introduces a delay in polling the element which means the topmost element in the queue which is the head element will be removed only in the last.

A lock ensures that only the currently executing thread has access to the shared resource and blocks other threads from accessing it until the current thread releases the resource. This is mainly used for synchronization and we can use its methods like a lock() and unlock() in separate methods.

Phaser is also a flexible barrier that blocks multiple threads for execution. It executes a number of threads dynamically in separate phases.

Issues in Multithreading or Concurrency

Multithreading or concurrency can result in several serious issues due to the concurrent execution of multiple threads. Below are few issues that arise due to multithreading.

Deadlock is a serious situation that arises in a multithreading environment in Java. This occurs when 2 threads infinitely waits for their execution to complete. In this case, both the threads are locked infinitely never executes since it waits for each other. This article details the deadlock situation.

The producer-consumer problem is a common issue seen in the multithreading environment in Java. We can solve this issue using the wait() and notify() methods until Java 5. After Java 5, we can solve this problem using the BlockingQueue. Producer-consumer problem solution waits for the queue to be non-empty before accessing any element and ensures there is enough space before adding any element.

Starvation is another issue that occurs in Java concurrency which means the thread is not allowed CPU time since other threads grab it. Hence the thread is said to be starved. The solution for this problem is fairness which means all threads are fairly given a chance for execution.

The slipped condition occurs in a situation where the thread has checked a condition and before it acts upon it, another thread changes the condition which results in an error for the first thread. This is another issue that arises out of multithreading in Java.

Below are the few constructs that help to resolve the concurrency issues in Java that we have seen above:

We have seen that deadlock occurs when multiple threads try to access the same lock in a different order. However, we can prevent deadlock by following the below methods:

Read/write lock is required when we have multiple threads reading and writing the same resource. When a thread is reading a resource and another writes the same resource, it can result in ambiguity. Hence to solve this issue, we can implement a read/write lock that does not allow any other read or write access when the current thread writes to it.

Reentrant means a thread can retake a lock for the already existing lock. An example of reentrant is Java’s synchronized blocks. This can result in a lockout similar to a deadlock situation if not handled properly. 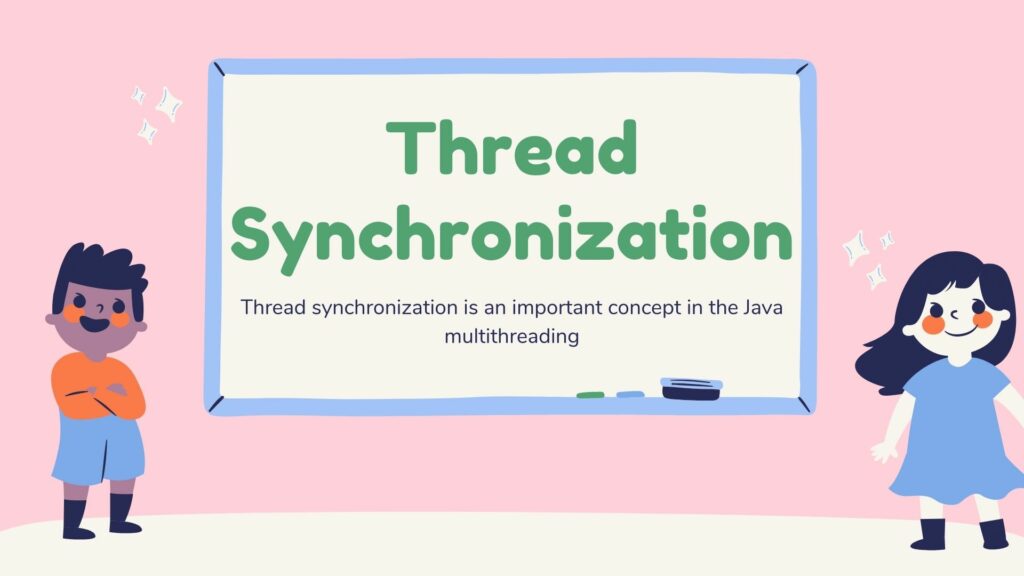 Thread synchronization is an important concept in the Java multithreading environment. Synchronization ensures that at a time only one thread can access the shared resource. Below are the various synchronization implementations. It prevents thread interference and consistency problem.

A static method that we declare with the synchronized keyword is a static synchronization. In this case, it will lock the class instead of the specific object.

The communication between threads to enable synchronization is inter-thread communication. This mechanism occurs when a thread in a critical section pauses during the execution and allows another thread to enter the critical section. For this we can use either the notify(), notifyAll(), and wait() methods.

Reusing the same monitor again for synchronization is called a reentrant monitor. This can avoid single thread deadlocking in Java concurrency.

In this tutorial, we have seen what is multithreading in Java or concurrency in Java, multitasking, and also seen an overview of thread-related concepts like Thread creation, thread pool, thread priority, thread dump, thread scheduler, deadlock situations. In the upcoming tutorials, we will see in detail these topics.

You can refer to the Multithreading interview questions to prepare for interviews that cover the top and important questions.