Java is a programming language that is based on OOPs concepts (Object-oriented programming system). In other words, it uses objects to define the data and their behavior. This makes the code more flexible and increases the readability and helps to understand the code easier. In this tutorial, we will understand OOPs concepts in Java.

Characteristics of OOPs in Java 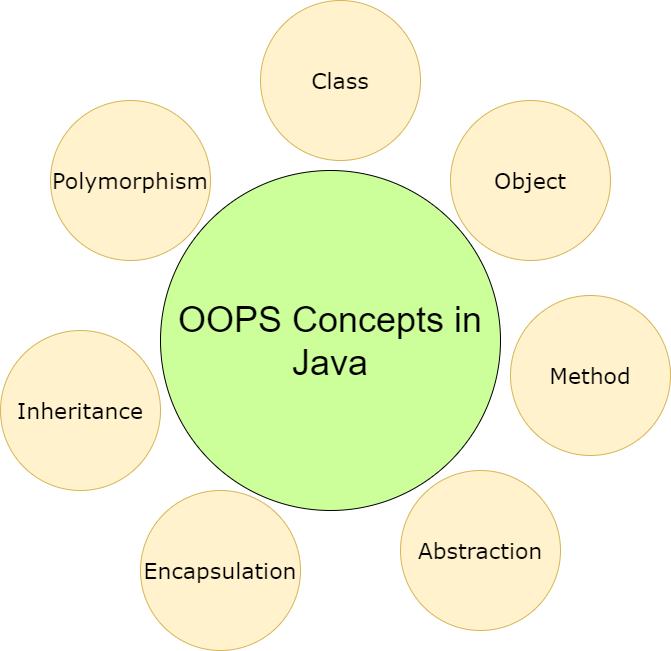 Advantages of OOPs Concepts in Java

Challenges of OOPs in Java

One of the important features of Object-oriented programming in Java is an object. An object represents a real-life entity which is an instance of a class. It contains both data and methods(behaviors). Objects have mainly 2 characteristics of state and behaviors. The state is nothing but an identity of the object(data) and behavior describes the function(method) of the object.

Let’s understand this with an example. Here class name is Mobile and it has attributes or states as mobilename, modelNumber, and color. In java programming, we call these attributes as variables and behaviors as methods.

The methods are call(), message(), switchOn() and switchOff().

The object name is m which is an instance of the class Mobile. Using this object m, we can access the attributes and methods.

A class can be defined as a prototype or a blueprint from which we can create multiple objects. In other words, it is nothing but a group of entities. Any java program we write should be written as a class which is yet another feature of object-oriented programming in java.

Below is an example of creating a class with multiple objects and how to access the data and variables. Here we have created a class named Person with 2 objects male and female. With these 2 objects, we can access all the attributes and methods of the class which is the main usage of objects. It reduces redundancy and improves code readability. We have also created a constructor for the class which gets invoked when the object is created. To understand more on constructors, please refer to constructors in java tutorial.

Abstraction is one of the main OOPs concepts in Java. It mainly defines what kind of data needs to be visible and what needs to be hidden. In other words, it just provides the methods and not the internal functionality. For example, when we use a mobile phone, we just know its behavior but we don’t know the inner mechanism of how it works. We can use abstraction to make the application more secure. For example, when we log in to net banking and provide username and password, the password is actually hidden.

We can use this feature of object-oriented programming in java for a class, data, or a method. To implement abstraction, we use interfaces and abstract classes. Let’s understand this OOPs concept in Java in detail below.

To create an abstract class or method, we use the abstract keyword.

Example of Abstract class and method

Here, we have created an abstract class Scores since it contains 2 abstract methods and 1 normal method. The abstract methods getMarks and setMarks have only declarations and no implementation which means it does not contain any code within the function. We also have a non-abstract method getName with functionality within it.

The main idea of abstraction is that even though the functionality is the same, the way it needs to be implemented can be different for each class. This provides more flexibility.

For example, below is another class School which extends the same abstract class Scores. But if you notice, we can see that the implementation of the abstract methods is different here. We have the flexibility to change the implementation of the method. In this example, we have added 5 to the marks in getMarks method and added 2 to the setMarks method.

In this example, we have created an interface Shapes which has a method calculateArea. In an interface, we provide only method declaration and there is no implementation. To implement this method, we need to define another class.

Here we have a class Rectangle that implements Shapes class. For this, we use the implements keyword. This class provides the functionality of the method calculateArea. The main idea of this OOPs concept in Java is to provide flexibility for any class to implement the functionality in a different way.

We can also create another class named Square and implement Shapes class. This class can implement the calculateArea method in another way as below. Hence the method calculateArea can be implemented based on each class specification that implements the interface.

Encapsulation is another OOPs concept in Java that binds the data and its method from external interference. This means it does not allow other classes to access or update these data or methods directly. One good example is the Java class itself which tightly binds the data and its functions within the class. To achieve this, we declare the variables or data as private variables. We will discuss what is a private variable in detail in further tutorials about access modifiers. For now, just remember that private variables cannot be accessed outside a class. To access and update these data, we must use public get and set methods. We cannot access these private variables directly from other classes. Hence encapsulation helps to hide sensitive data from the user. It is also called data hiding.

One best example of encapsulation is a capsule itself (as the name suggests) inside which we have medicine which is not visible to us.

Let’s understand this OOPs concept of Encapsulation using an example. We have created Student.java class with private variables name and age. To access the variables from other classes, we need to use getName, setName, getAge, and setAge methods. These are called getters and setters in object-oriented programming in java.

We have created another class Department and from here we are trying to access the private variables of the Student class. So for this, we can use the getters and setters method accordingly. Hence this class does not know the inner implementation of the getter and setter methods. It just knows that getName will help to get the student name and setName will help to set the student name. This is the main idea of this OOPs concept in Java which is generally used in developing any application.

Suppose we try to access these private variables directly from another class without using the methods, we will get an error as below. Since these variables are private, it will throw an error as it is not visible,

When one class can reuse the methods and variables of another class, we call this OOPs concept in Java as Inheritance. This class can reuse the other classes’ data and functions by extending to that class using the extends keyword. The parent class is called the base class or superclass and the class that extends the parent class is called the child class or subclass or derived class. In other words, using this OOPs concept in Java, we can define a new class using the existing class by inheriting all the variables and methods.

The main use of this feature of Object-oriented programming in java is to support the is-a relationship. For example:

Class A is the parent class and Class B is the child class.

extends is the keyword that supports Inheritance OOPs concept in Java

Now that we have an idea about this main OOPs concept in Java named Inheritance, let’s look into its details with a simple example.

Here Vehicle is the parent class which contains a string variable name and 4 different methods startVehicle(), applyBrakes(), stopVehicle(), and setName. It also contains the function implementation.

We just need to create an object for the Car class and access the data and methods using this object. In simple words, we can say that a car is a vehicle. Hence inheritance in java supports is-a relationship.

There are different types of Inheritance as described below:

When one class extends another class, we call it a single inheritance which creates a parent-child relationship.

When more than 1 class extends the same parent class, we call it a hierarchical inheritance. For example, Class B and Class C extend Class A.

There is also another type of inheritance named Multiple Inheritance where the class extends more than 1 parent class. But this is not supported in Java but is supported in C++.

We will understand in detail about the Inheritance types in a separate tutorial.

Polymorphism, as the name suggests, means having “multiple forms“. This is another important OOPs concept in Java which is used commonly in developing many software applications where we can have different implementation of the same method.

Here we have class Bike which is a parent class and has a method speed() with a statement as “Default speed”.

Similarly, we can have another subclass MediumBike that extends the superclass. So when we call the speed() method using this class object it prints “Medium speed”.

There are 2 types of polymorphism:

When polymorphism is resolved during compile time, we call it as static polymorphism. One best example is method overloading. This means we can have multiple methods of the same name in a class but having different signatures(parameters).

Here we have class Bike which is a parent class and has a method speed() with a statement as “Default speed”.

In the same way, we can have another subclass FastBike that extends the superclass. So when we call the speed() method using this class object it prints “High speed”.

In the above example, both the classes have the same method name speed. During runtime, the JVM decides which method to call. Based on for which class we create an object, the corresponding method will be called. Here since we are creating an object for class FastBike it calls that class method.

Suppose we are invoking as in the below code. It will call the Bike class method and prints “Default speed”

We will discuss in detail about different polymorphism types with more examples in a separate tutorial.