We can use the volatile keyword for either primitive data types or objects. Also, we can use it only for variables and not for methods or classes. Volatile variables always read and write the data directly from the main memory. It ensures the right ordering and visibility of variables.

Imagine we have 2 threads T1 and T2 that use the same shared variable var and the computer has multiple CPUs for better performance. When we do not declare this variable as volatile, both the threads can read and write the var variable into its own CPU cache and do not update the main memory. In this way, each thread has its own variable copy in the corresponding cache whereas a different value in the main memory. This can lead to incorrect variable updates when both threads try to read and update the same variable at a time. It is another concurrency issue in Java.

The below diagram explains the above issue clearly. This issue is called the variable visibility problem. 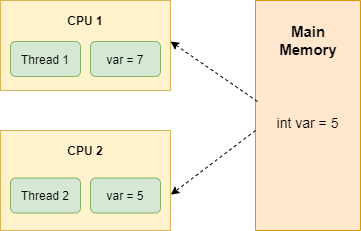 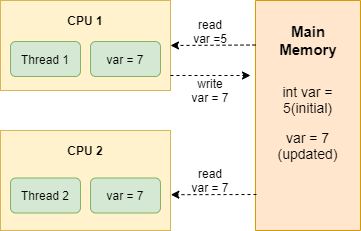 Below is the syntax of declaring a volatile variable.

Suppose, both the threads want to update the shared variable, then the volatile keyword is not sufficient. For this, we have to use the synchronized keyword which we will discuss in a separate tutorial.

Use of volatile keyword

Example of volatile keyword in Java

Below is an example of using a java volatile keyword for a counter variable where 1 thread updates the value and the other thread reads the value. Since we have used the volatile keyword after the write thread completes its action, it executes the read thread and then again continues the execution. This solves the concurrency issue in Java.

Suppose, we don’t use the java volatile keyword, then the output will be as below and the writeData thread executes infinitely.

Difference between volatile and synchronized keyword

Below are the differences between the volatile keyword in Java and the synchronized keyword.