Bulb Switcher LeetCode Solution – There are n bulbs that are initially off. You first turn on all the bulbs, then you turn off every second bulb.

Return the number of bulbs that are on after n rounds. 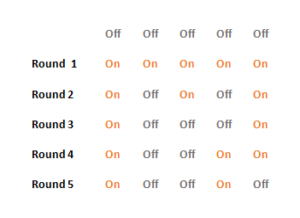 So the number of bulbs that are on after the nth round is 2.

If we observe the pattern, we can find that the bulb i  is toggled k times, where k is the number of factors of i(except 1).

So if k is odd, the bulb will be off at the end(after off times of toggling).

if k is even, the bulb will be off at the end(after off times of toggling).

if we check for some numbers, we can find out that when k is odd, the number is a perfect square.

So we need to find out how many perfect squares are present in the range [1…n].

Here we are just executing a statement. Time complexity is O(1).

We are not using any extra space. So Space Complexity is O(1).