In this problem, we are given an integer and are required to convert into roman numeral. Thus the problem is generally referred to as “Integer to Roman” and this is Integer to Roman Leetcode Solution. If someone does not know about Roman numerals. In the old times, people did not use integers as we use in recent times.

Roman numerals are usually written from left to right in decreasing order, but there are some exceptions to this. If some numeral which is smaller than the next numeral we subtract the current numeral from the positive sum. A general rule of thumb is not to repeat same numeral more than 3 times. One should check the image below for the integer to roman numeral conversion. 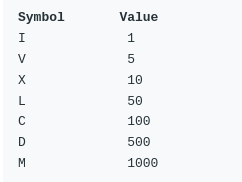 Explanation: Since I is equivalent to 1, we repeat it three times to get the sum = 3.

Explanation: We cannot repeat I 4 times, because we cannot repeat I more than 3 times. So we plane an I before V. Since I is less than V, thus 1 is subtracted from total which is equal to 5. Thus making a total sum equal to 4.

The problem “Integer to Roman” can be solved in greedy manner where first we try to convert the number to the highest possible numeral. The brute force approach to the problem is not possible because it is neither feasible nor generally applicable. In this manner we keep moving to smaller denominations in Roman numeral. But this approach will fail when we try to convert 4. This approach will print 4 times I. So, we need to find a way to get around this.

Well, if we look closely there are only some countable possible ways when we can run into this exception. These exception are only when we repeat some numeral more than 3 times. So just try to find the ways to write the integers which can fall into exception. We get to know that the exception are 4, 9, 40, 90, 400, 900 which can be converted to IV, IX, XL, XC, CD, CM respectively.

O(1), because we are using constant number of steps to find the result.

O(1), since we have stored only constant number of variables and the arrays that we have used also have constant size.