Welcome to the Python tutorial

It doesn’t matter whether you are a beginner or you are here only to revise your concepts, because, here I am going to teach you right from the basics. Let’s get started. Here in this article, we will guide you on how to install Python. You can install python on Windows or on Mac OS or on Linux.

You can download python from https://www.python.org/downloads/windows/
Click on the “Latest Python 3 Release – Python x.x.x” link. If your computer is running a 64-bit version of Windows, download the Windows x86-64 executable installer. Otherwise, download the Windows x86 executable installer. After downloading the installer, follow the steps for installation. During the installation make sure to select “Add Python 3.x to PATH” 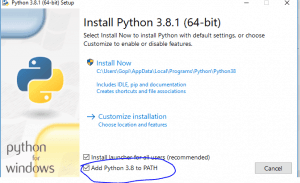 Mac OS X comes with Python 2.7 out of the box.
You do not need to install or configure anything else to use Python 2. These instructions document the installation of Python 3.

Before installing Python, you’ll need to install GCC. GCC can be obtained by downloading Xcode. Xcode is Apple’s Integrated Development Environment (IDE). You might already have Xcode on your Mac. If not, you can get Xcode from the Apple AppStore.

The script will explain what changes it will make and prompt you before the installation begins. Once you’ve installed Homebrew, insert the Homebrew directory at the top of your PATH environment variable. You can do this by adding the following line at the bottom of your ~/.profile file

Now, we can install Python 3:

It is very likely that you already have Python installed out of the box. To check if you have it installed (and which version it is), open a console and type the following command to install python on Linux Ubuntu :

This article is a part of the Python Tutorial.