Python programming language and its numerical mathematics extension NumPy has its own plotting library called matplotlib. It provides an object-oriented API with which you can embed plots into applications using general-purpose GUI toolkits like Tkinter, wxPython, Qt, or GTK+. John D. Hunter originally wrote Matplotlib, but he died in 2012 at the age of 44. Since then it’s been an active development community maintained by host of others.

As said, “A picture is worth than a thousand words” Python has this visualization library called matplotlib for 2d plotting of arrays. With matplotlib, you can do several plots like line, bar, scatter, histogram, etc.

The matplotlib is a gigantic library and getting the right plot is achieved through trial and error. Generating a basic plot is an easier thing but having a command over the matplotlib library is quite challenging.

This tutorial is for beginner to intermediate level with a mix of theory and examples. We are going to cover:

Why matplotlib is confusing:

Even though there is immense documentation on matplotlib library, learning matplotlib is not quite easy due to the following factors:

Let’s learn the core concepts of the design of matplotlib before moving to the examples.

Pyplot is a Matplotlib module with which you can get a MATLAB-like interface. One of the advantages of MATLAB is, it’s globally applicable. Unlike Python, the import is not heavily used in MATLAB. Most of the functions of MATLAB are easily available to users at the top level.

Pylab brings together the classes and functions from matplotlib and NumPy. The people who are familiar with MATLAB can be easily adapted to Pylab as there is not much need for usage of import. By simply adding this one line

the former MATLAB users can call plot() or array(), as they do in MATLAB.

But Python users know that using import * is bad coding practice as it imports everything into the namespace. As a result, you might end up overwriting Python’s built-ins unnecessarily. And it becomes difficult to find out the bugs. Hence MATLAB advises not to use import *  in its tutorials. Instead of import, we need to use %matplotlib to integrate IPython.

Pylab source code actually masks a lot of potentially conflicting imports. For instance, using python –pylab in the terminal or command line, or %pylab actually calls ‘from pylab import *’ under the hood.

Even though matplotlib, explicitly recommends not to use pylab anymore, it still exists. Instead of using pylab we can use pyplot. pyplot makes matplotlib work like MATLAB with its collection of command style functions.

The Hierarchy of matplotlib:

The object hierarchy is one of the main concepts of matplotlib.  If you already have gone through some other matplotlib tutorial, you might have came across this line:

It looks like a simple one-line code but the plot is actually a ladder of nested python objects. Under each plot, a structure of matplotlib objects exists.

The Figure object is the top-level container for all plot elements, contains multiple Axes. The axes is different from the axis. The Axes is an object which stores several objects like XAxis, Yaxis and we can create plots by calling its methods.

In the whole picture, Figure is a box-like container that contains multiple axes. In the hierarchy, there are smaller objects like ticks, individual lines, legends, and text boxes exists below the axes. Right from ticks and labels, each element in the chart is a Python object. 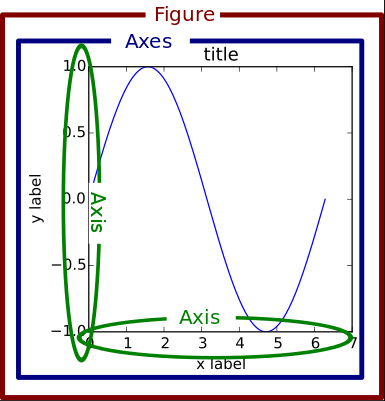 The above chart is an example of matplotlib hierarchy. Need not to worry if you are not familiar with this, we are going to cover in our tutorial.

If you don’t have matplotlib installed, then install it using the below command in your tutorial.

Execute the below code:

plt.subplots() returns a tuple containing 2 objects. For now, let’s care only about the first object of the tuple which is Figure object. We can retrieve the first tick of the yaxis of the first axes object by drilling down the hierarchy of the figure.

The figure contains a list of Axes. And each Axes have a xaxis and yaxis, each of them has multiple major ticks.

matplotlib calls this as figure anatomy rather than figure hierarchy. You can find the anatomy of figure illustration in the official matplotlib documentation. 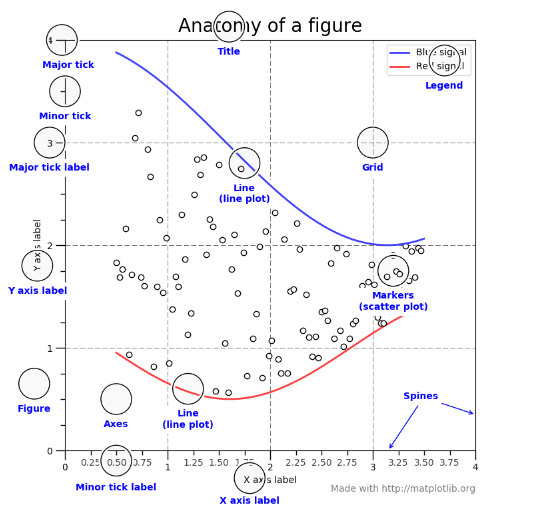 Before moving to the visualizations we need to understand the difference between the state-based or stateful and stateless or object-oriented interface.

We can import the pyplot module from matplotlib and name it as plt by typing the below command.

All functions of pyplot, for example plt.plot() refers to the existing figure and axes. If there is no existing figures and axes, it creates a new one. As mentioned in the matplotlib documentation, “[With pyplot], simple functions are used to add plot elements (lines, images, text, etc.) to the current axes in the current figure”.

Difference between stateful and stateless Interface:

Ex-MATLAB users say this as “plt.plot() is a state-based/state-machine interface, that tracks the current figure implicitly.

This is an example of a stateful interface:

We are getting the current Axes object. gca() is a function here not a method:

In pyplot, most of the functions also exist as methods of matplotlib.axes.Axes class. Calling the gca method on the current figure:

plt.plot() returns the current axes of the current figure. The stateful interface implicitly tracks the plot it wants to reference.

In the object-oriented approach, there are corresponding getters and setters methods.

Calling plt.title() and gca().set_title() does the samething. This is what its doing:

Similarly all the top-level functions plt.grid(), plt.ylabels(), plt.legend(), etc., follows the same structure of assigning the current axes with gca() and calls the method of current axes.

When the graph becomes complex, the object-oriented approach is handy. Let’s do some plotting to understand these concepts.

The plt.sublpots() returns a single figure and single AxesSubplot object.

While calling plt.subplots() we are not calling any arguments. The default arguments are nrows=1 and ncols=1.

Since we have the AxesSubplot object, we can call its methods similar to the way we call the functions of the pyplot.

Let’s see an example of a stacked area graph of three-time series.

Install the numpy by typing the below command in your terminal.

The below code generates the graph:

Here’s the explanation for the above code:

Here we are saving the Axes object to the variable axes. By directly calling the methods of axes, we are creating a stacked area chart, setting title, adding a legend, and setting the label of the y-axis. This is an example of an object-oriented approach. This is the output graph: 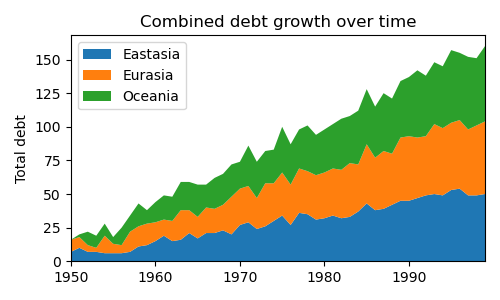 The code does the following things:

With the stateful approach, it’s difficult to handle the two axes objects individually. The output graph will be like: 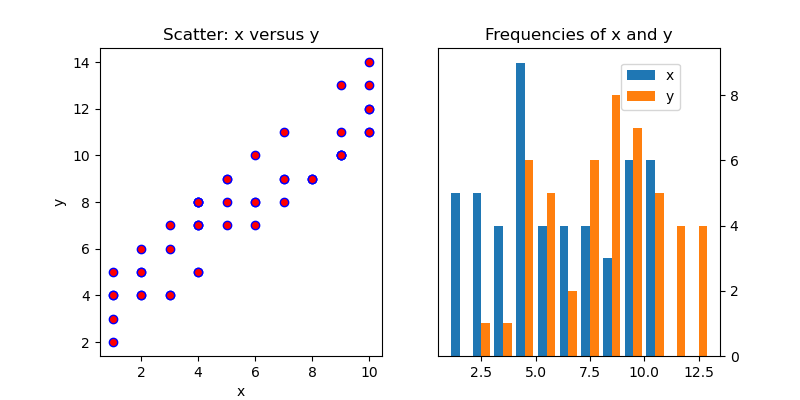 The marker argument in the scatter function defines the marker style that you can change as per your wish. Here we are changing the marker to ‘s’.

And by placing text inside the dollar sign changes the text to Italics. 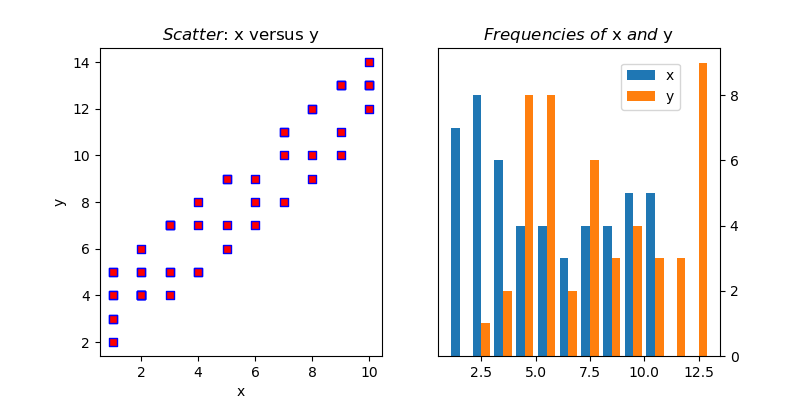 As we have seen before, from the figure itself we can get the axes objects.

Also, we can create a figure that contains axes objects in the m*n grid. One such example is:

If you check the type of axes, its no longer AxesSubplot. Instead, it’s a numpy array.

The Numpy array is just a container. On each of the Axes objects, we need to call the plotting methods. We can use the flatten method to convert the 2d Numpy array to 4 objects to type AxesSubplot.

There is an alternative way to do this. But the previous method is flexible.

Let’s understand to understand some advanced features of subplot with an example. Using Python libraries io, urllib, and tarfile we will extract macroeconomic California housing data from a compressed tar archive.

The url variable is the URL that contains the data.  The above code extracts the data from the file and stores it to the numpy array.

The T attribute is nothing but the transpose of the array.

Let us write one more function that acts like an “in-plot title” by placing a text box inside a plot.

We can customize the subplot with matplotlib’s gridspec module. We can interact with gridspec module with pyplot’s subplot2grid(). This is the layout we are going to create: 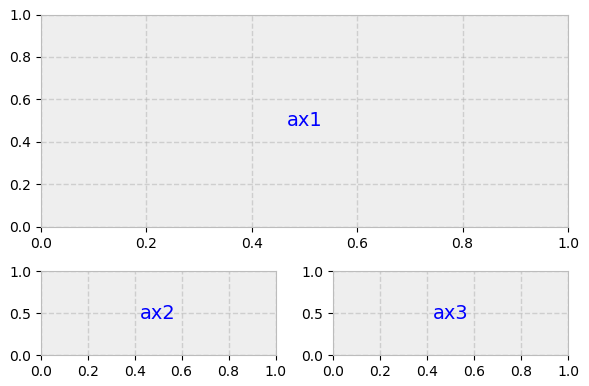 Here we have a 3*2 grid. ax1 contributes to twice the height and width of ax2 and ax3. 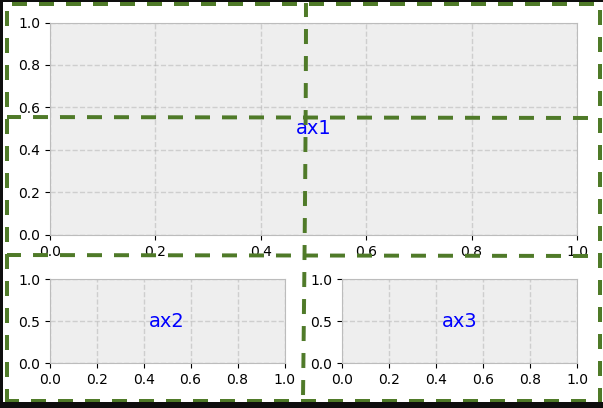 To the subplot2grid() we are passing (row, column) as an argument which is nothing but the location of the axes object in the grid.

Now we can deal with each of the axes individually.

The colorbar method adds the colorbar to the plot. It gets called directly on the figure, not on the axes. It takes ax1.scatter() as an argument, which maps the average home value to the ColorMap. 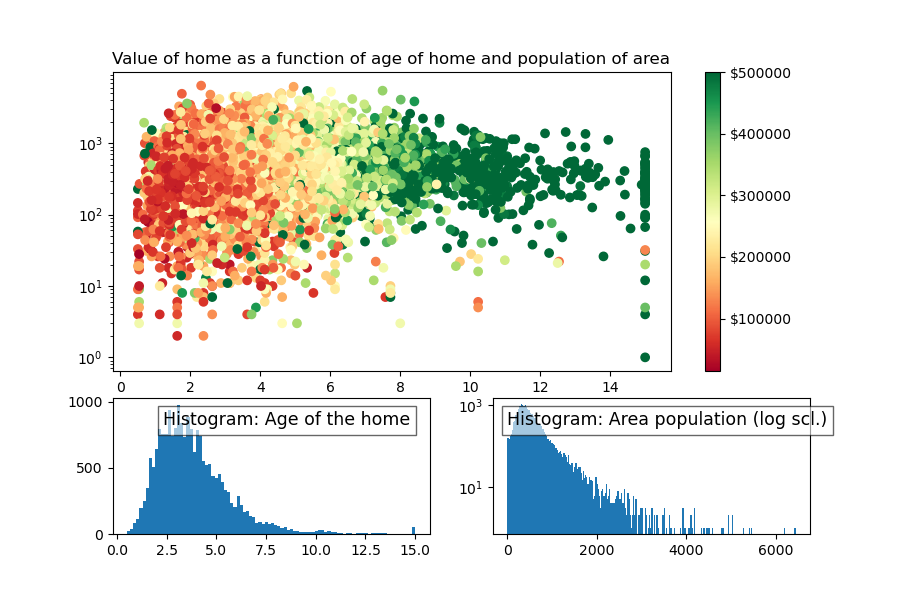 As we move up and down along the y-axis, there is not much differentiation in the color. It indicates that the age of the house plays a stronger role in determining the value of the house.

A figure can be created in two ways:

The most recently created figure is the current figure. Both of these figures are in memory, each accessed with their corresponding ID. As in MATLAB style, the indexing starts with 1.

By mapping the plt.figure() to the each of the fignums, we can get the figure.

When you open a number of files, then to avoid memory error you need to close them. plt.close() closes the current figure, plt.close(‘all’) closes all and plt.close(num) closes the figure number num.

The methods imshow() and matshow() are the heavily used methods. matshow() is a wrapper around the imshow(). These are used to visualize a numerical array as a colored grid.

Now we can represent the array1 and array2 in image format. Using dictionary comprehension we are going to toggle off the ticks and all the axis labels and pass the result to tick_params() method. 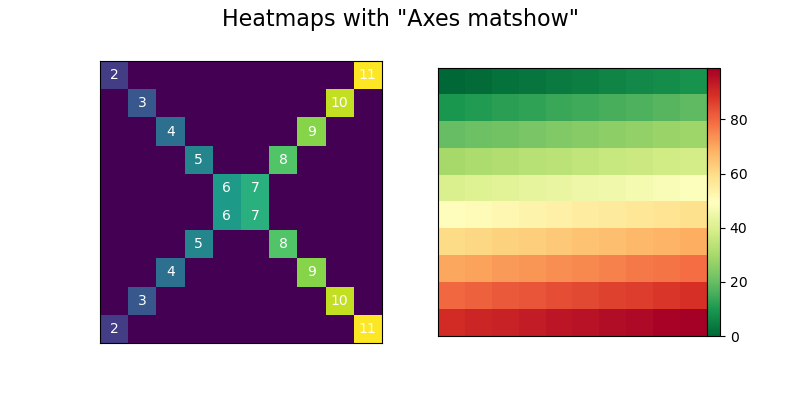 For example, the plot() method which we use Pandas on Series and DataFrame is just a wrapper around plt.plot(). As we know already that plt.plot() implicitly refers to the current figure and axes, Pandas follow just the same.  Another example is if the index of the Pandas Dataframe contains the date then, Pandas calls gcf().autofmt_xdate() to retrieve the current figure and it also auto-formats the x-axis.

Now we have created an AxesSubplot in Pandas. Check the type to make sure of that.

It’s better to understand the internal architecture when mixing the plotting methods of Pandas with matplotlib calls. We are going to see an example where we plot the moving average of a widely watched financial time series. We are going a create a Pandas series and call plot() method on that. Then we are going to customize it by its Axes created by the matplotlib’s plt.gca().

The explanation of the code: 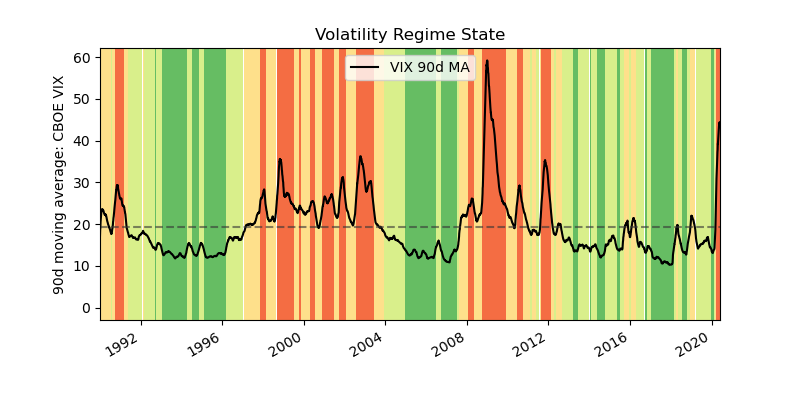 In matplotlib, you can configure style across the different plots in a uniform way. There are two ways to do that.

The matplotlibrc file is a text file containing the customized settings of the user and can be remembered between sessions.

We can also change the configuration parameters interactively as mentioned before. Since we have imported matplotlib.pyplot as plt, we can access the rcParams.

The objects starting with ‘rc’ are the means to interact with plot settings and styles.

plt.rcdefaults() replaces the rc parameters to the default values listed at reParamsDefault. This overrides whatever you have customized.

plt.rc() is for interactively setting the parameters.

plt.rcParams() is a dictionary-like object. The customized changes in the matplotlibrc files are reflected here. You can also change this object directly.

To set a style:

As mentioned already matplotlib interacts with different backends. The backend does the major work in rendering a chart. Some of the backends are interactive and indicates the user whenever they are changed.

You can check its status by:

You can also change it on/off:

The usage of this interactive mode is:

An example with interactive mode ‘on’: 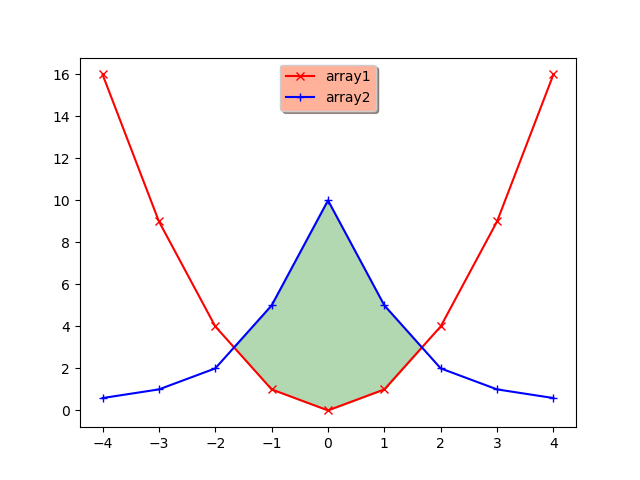