Spring Boot is developed by Pivotal Team with the aim of creating a production-ready spring application quickly. This tutorial gives you an overview of the features of Spring boot and its advantages in the development life cycle. We will discuss the advantages of spring boot and spring boot installation in this tutorial.

Below diagram gives you an overview of Spring boot framework and its corresponding modules:

The following are the environment pre-requisite matrix supported by Spring boot 2.1.3.RELEASE.

We have discussed advantages of spring boot and spring boot installation, now we will mention about how to use the command line interface to play with spring boot.

After downloaded, please follow the instructions from the unpackaged archive of INSTALL.txt.

The following section gives you an overview to run the Spring boot applications using CLI. For instance, the following is a sample groovy script:

Other Features of CLI

The following are few of the advantages of using CLI along with groovy code:

Standard Groovy syntax supports the use of @Grab annotation that lets you declare dependencies on a third party library and make it available on the CLASSPATH.

Spring Boot extends Groovy’s standard @Grab support by letting you specify a dependency without a group or version (for example, @Grab(‘freemarker‘)). Doing so consults the default dependency metadata of Spring Boot to deduce the group and version of the artifact.

Apart from the above, there is no need to include the import statements in the groovy code explicitly, and you can mention the annotations as follows:

No need to include the main method in the groovy script as SpringApplication is automatically created.

To package your application into a self-executable JAR file, run the following command:

The JAR that got created contains all the classes generated by the compiled application as well as its dependencies & entries in CLASSPATH.

This JAR can be deployed using:

Refer the below links from the official spring boot documentation: 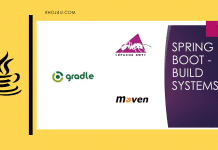