In this tutorial, we will develop our first Selenium script. This is a basic script to understand the foundational concepts of writing code in Selenium. We will learn about the import statement, Webdriver initialization, launching a webpage and then safely closing the launched webpage. The scenario which we are automating consists of the following steps:

Now let us see how we can automate the above manual steps using Selenium WebDriver.

We need to do the environment setup before we can write the automation code. The pre-requisites to develop the very first Selenium Webdriver script are

In case you have missed any of the above set up, please refer to the individual tutorials available in our course for them.

We have created a Java project in Eclipse and a package inside it. We have also created a java class which is open in the editor. All selenium jars are present in the  Referenced Libraries. Our Java project looks like below now. With this, we are all set to start writing our automation code. 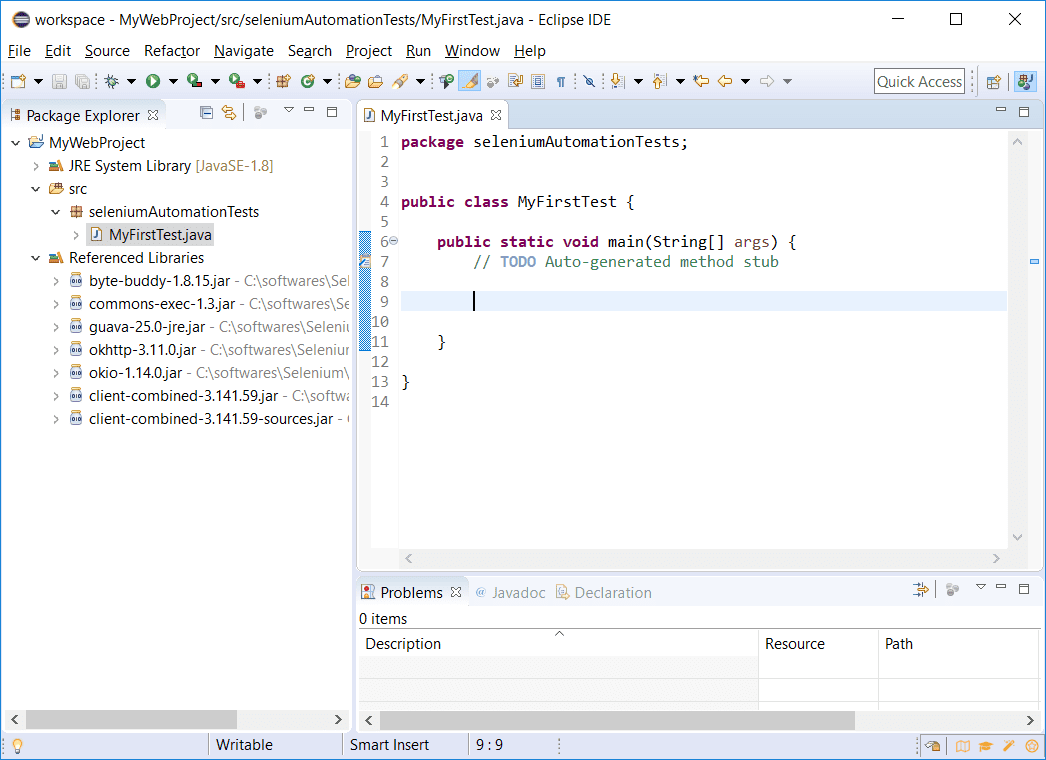 To use Selenium WebDriver, we need to create an object of it and initialize it with the browser driver in which we wish to execute the automation script. I am using ChromeDriver to start with by initializing it as shown in the code below. We can execute the code in any browser like FireFox, IE by using driver corresponding to it. 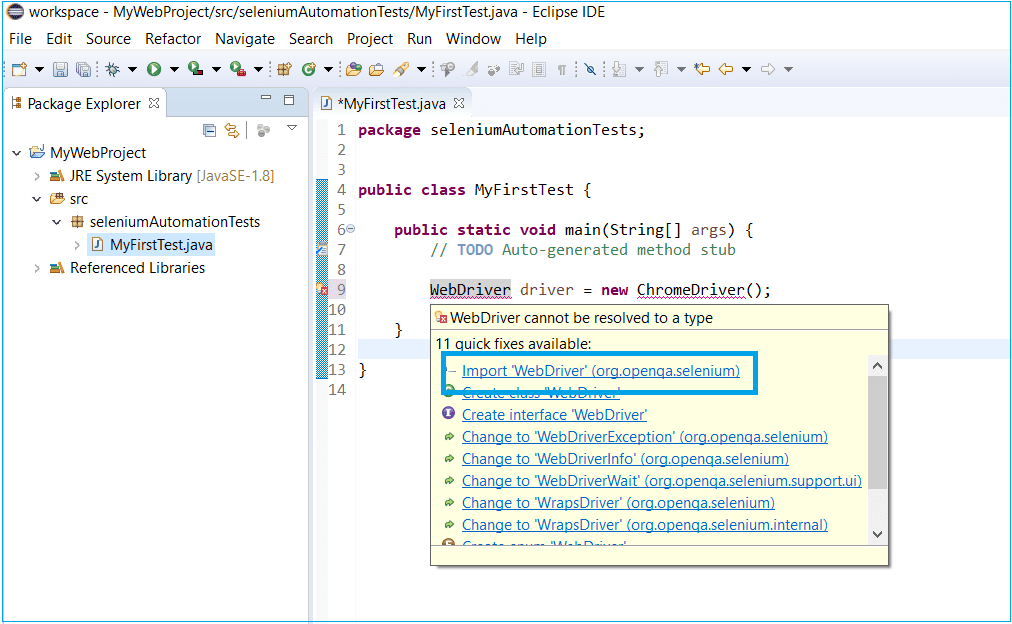 Similarly to resolve the compiler error for ChromeDriver, import ‘ChromeDriver’. The import statement to import related package will get added at the top. 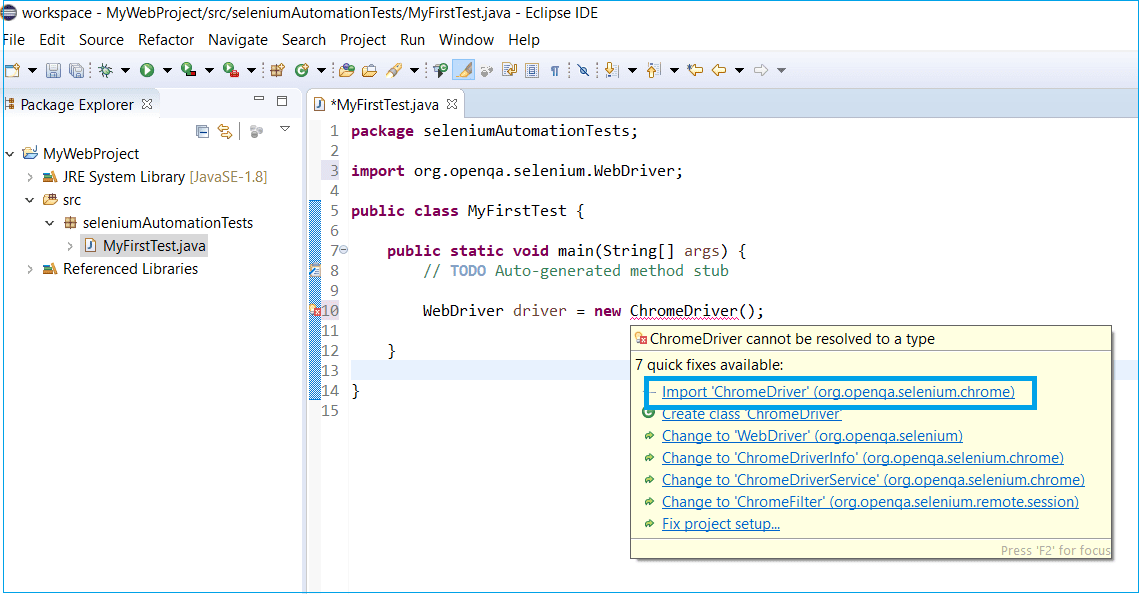 Next, let us write the Selenium code for our manual scenario in our test class. Refer to the code below:

All the different statements of code are explained below in detail:

Now, after understanding this much code for initial setup, we can write the Selenium code to automate the scenario specific steps.

After writing the code in Eclipse IDE in the test class, the Eclipse window will look as shown in the below image. 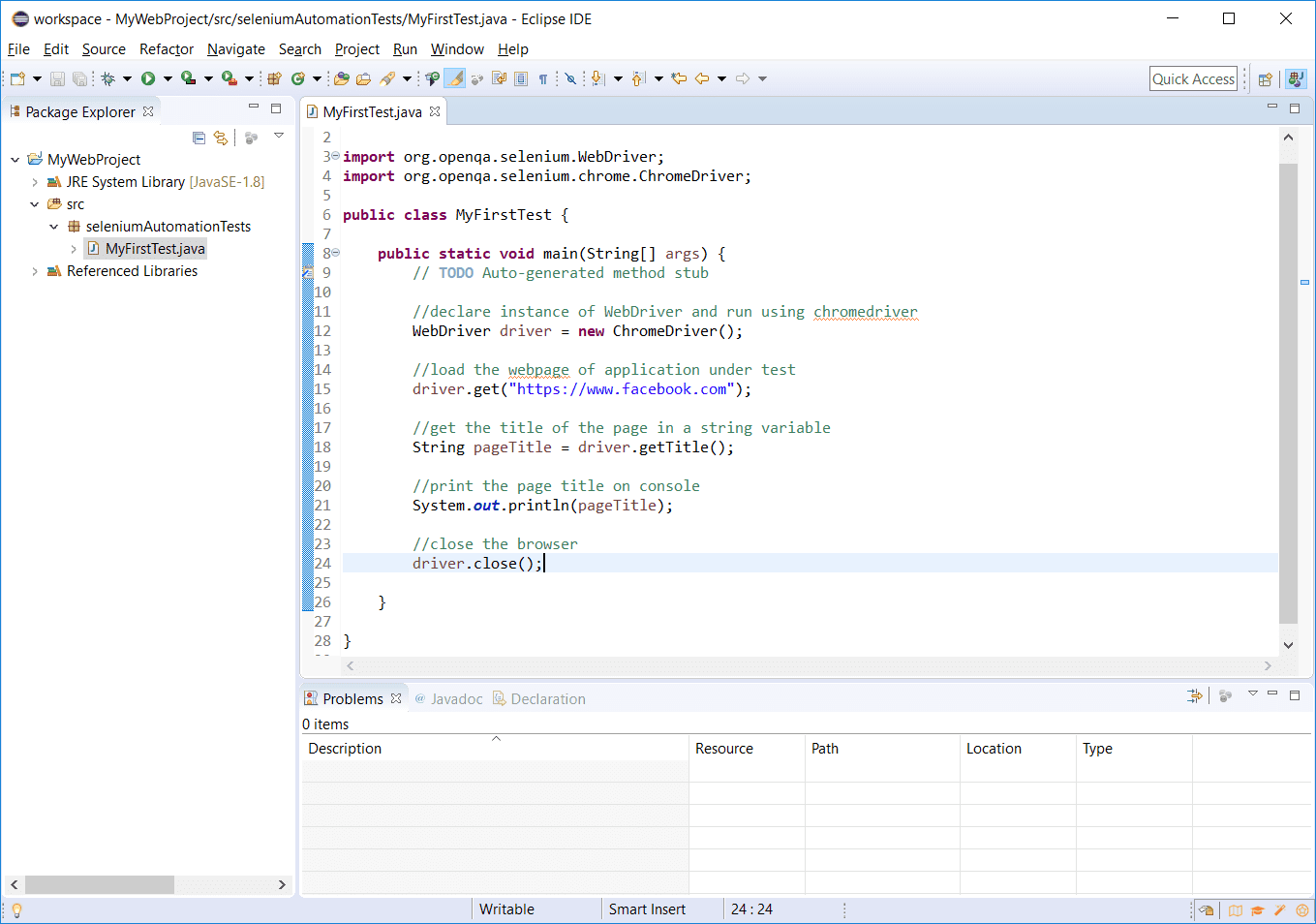 Now we have completed writing the code in the script. Next, we should execute the script to check the output. But to run the script we need to complete one more step. We need to download the browser specific driver like ChromeDriver in our case and set the Path environment variable which points to the location of the driver in the local system.

2. Next step is, to download the Chrome browser driver. For that, we need to go to the download section of chromium official site https://sites.google.com/a/chromium.org/chromedriver/. 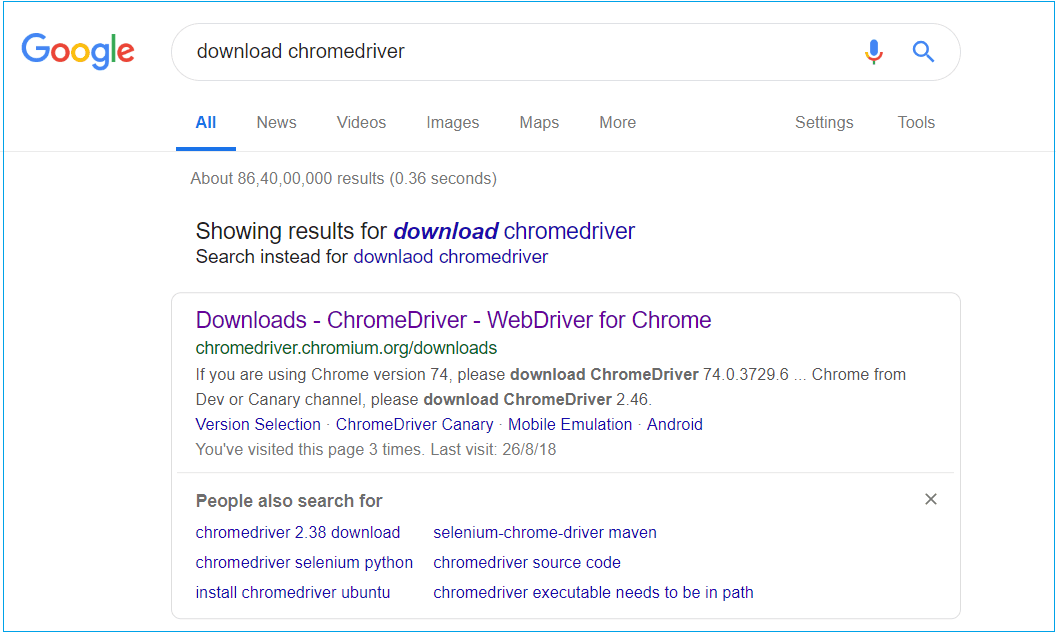 3. Select the version of Chrome Driver as per the chrome browser in your machine and click on it. With that, it will navigate to a webpage with corresponding executables for different platforms.

4. For windows, select chromedriver_win32.zip and click on it. It will download a zip file. Save this zip file to an appropriate location.

Note: Please select the chrome driver version which matches your Chrome browser version. Otherwise, the chrome browser session will not be established by the script and exception will be thrown. For this reason, decide the suitable version of chrome driver considering the official chrome driver site https://sites.google.com/a/chromium.org/chromedriver/downloads/version-selection.

5. Extract the content of the saved zip file in a folder and you will get chrome driver executable.

We have downloaded the chrome driver executable in the system. Now Selenium script will use it to connect to Chrome browser. But, how will Selenium know where is the driver located while running the script? For that, there are two methods to help the script find the driver:

2. The system settings window will be displayed as shown. It will automatically open the window in the advanced tab. At the bottom right of the window, click the button for environment variables.

3. The Path environment variable points to the binary files of installed software packages. If any external software system needs to access these binary files, it will reach to them using the Path system variable. For adding the entry for chrome driver executable, go to C:\softwares\drivers and copy this folder path. 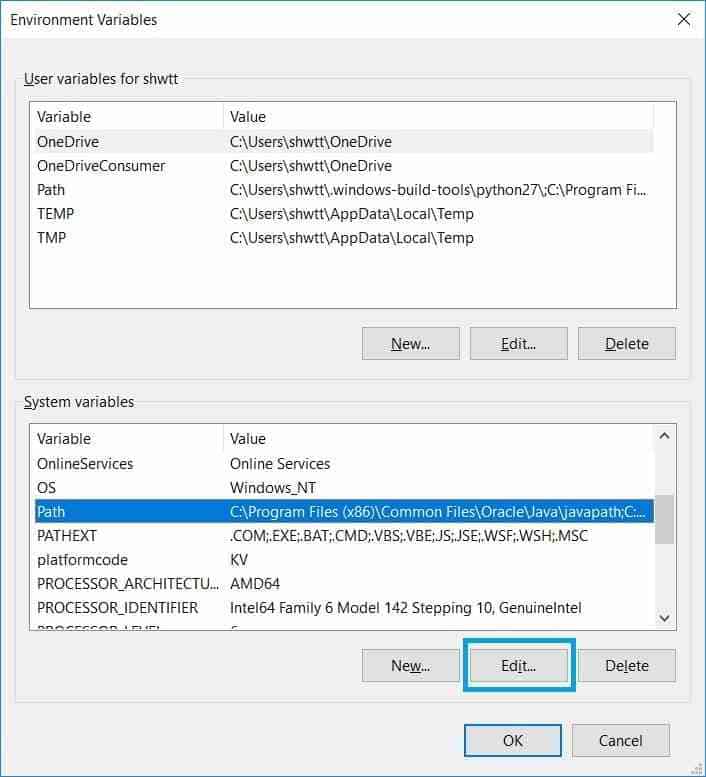 5. On the Edit environment variable screen, click on new and enter the path of the driver folder which is C:\softwares\drivers. Once done, click on OK button which will add an entry for this folder in your systems path variable. 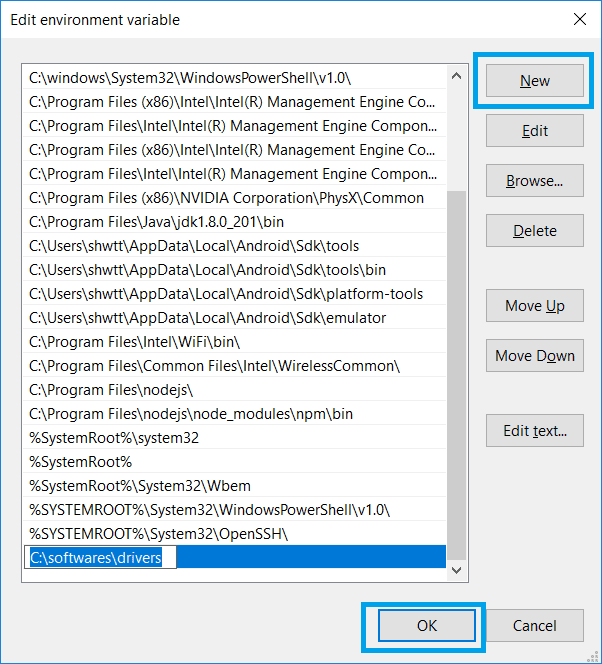 6. Click on OK and you can come out of the system variables setup window. This completes the steps for Path environment variable setup for driver executable. 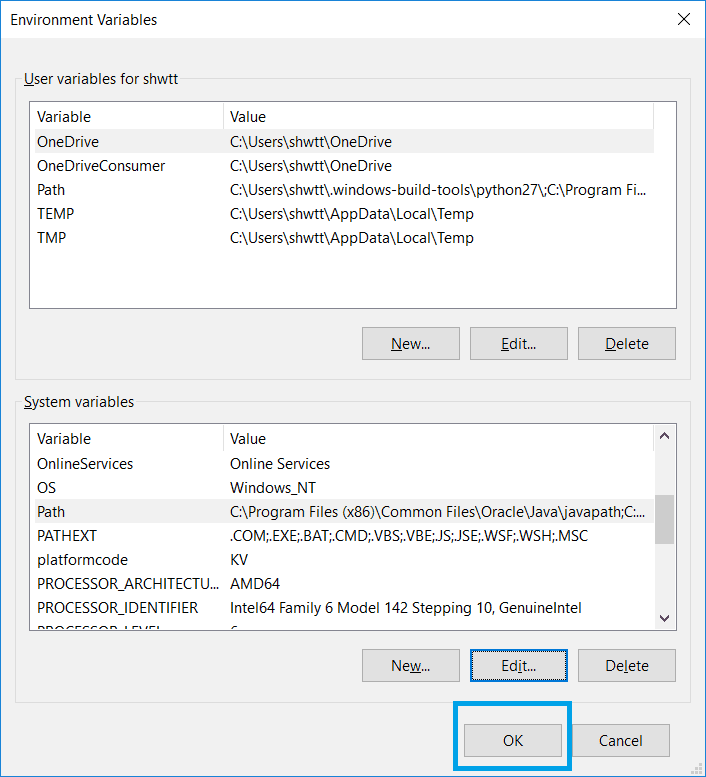 Now we have completed the Path environment variable setup. We are all set to run the Selenium script now.

To execute the script, right click on the java class name and go to Run As > Java Application. With this, the script will start its execution. It will 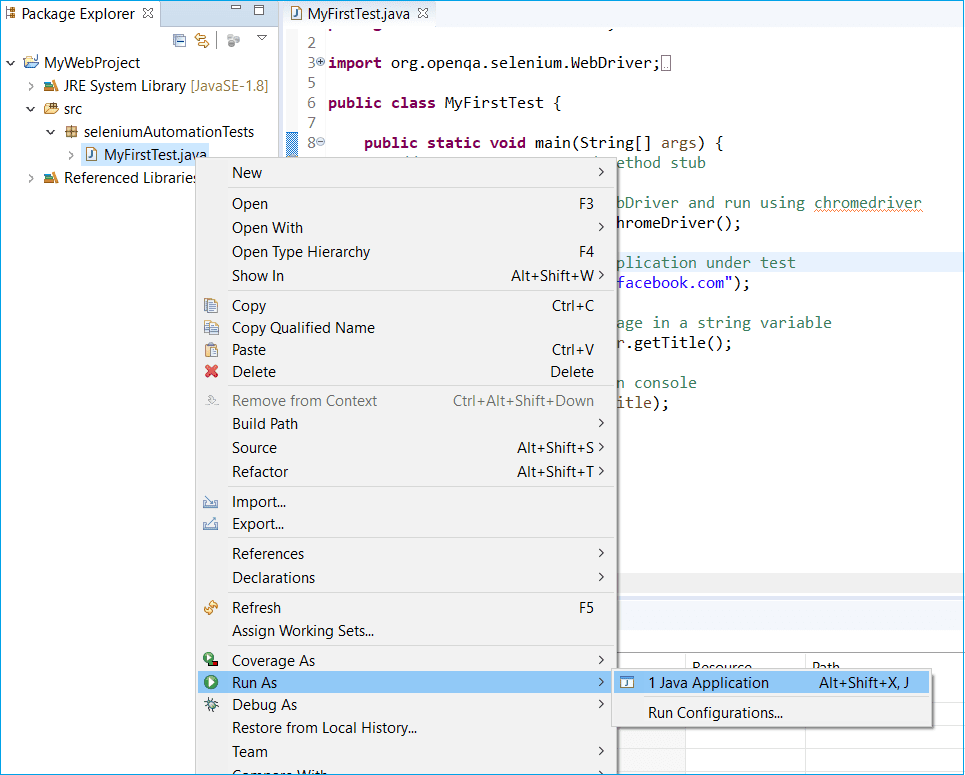 When we start the execution of our script, the application under test will be started in a new chrome browser window. Then, it will perform the commands provided in the script. Thus, in our case fetch the page title and driver.close() method will close the browser window.

We can observe the output of the script on the console window at the bottom of the Eclipse IDE. As we can see, it printed the page title here. 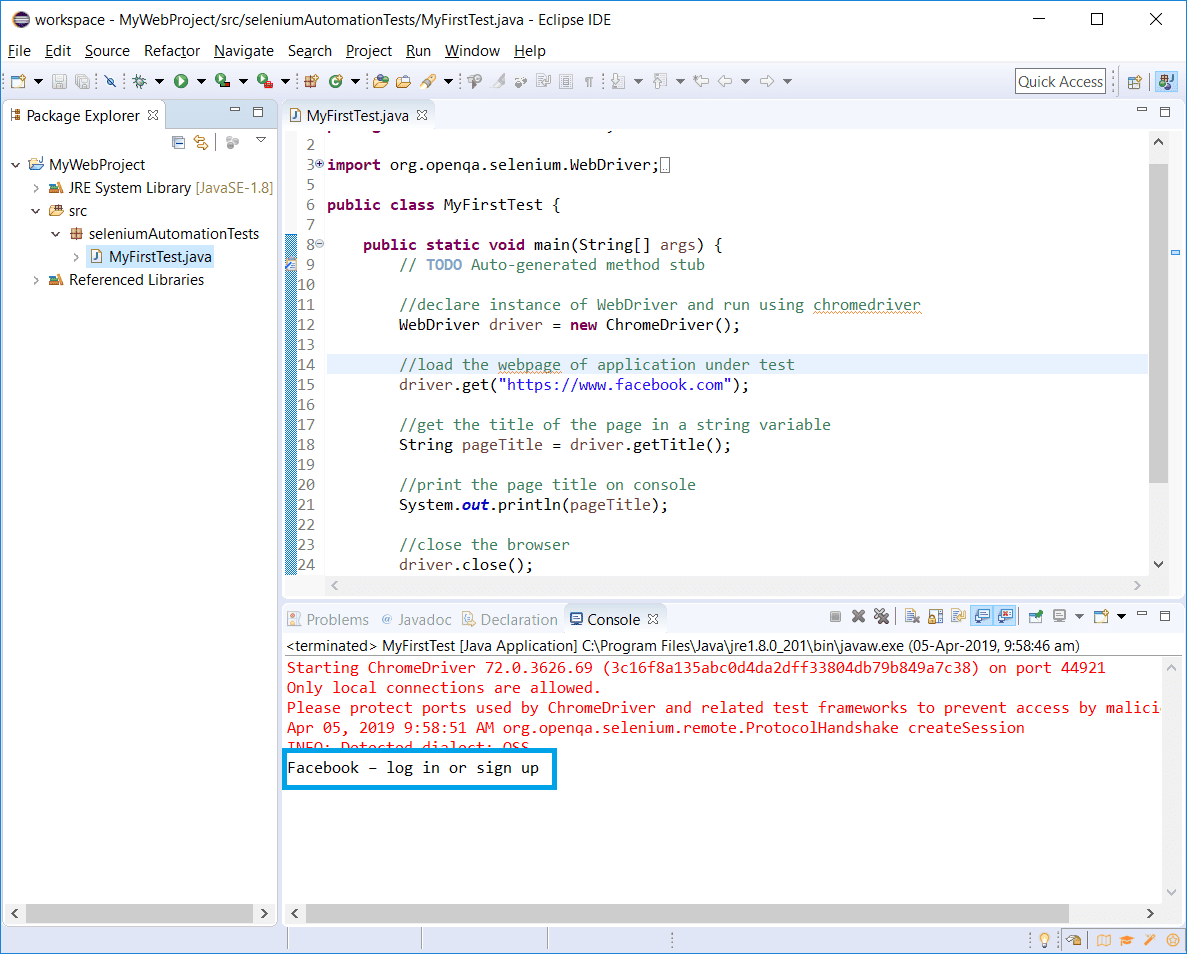 This tutorial talks about a simple scenario to automate using Selenium WebDriver for Selenium learners. Moreover, it lists the prerequisites of environment setup before writing Selenium code. After setup, we wrote code to automate the manual scenario steps. Also, we executed the code in Chrome browser. Next, we will see how to execute this script in different browsers in the coming tutorials.