Black box testing is the testing method of input and output of the application under test without considering its internal processing.

This testing focusses on the behavior of the system with various types of inputs without bothering about its internal architecture, implementation and data path. Therefore, black box testing is also known as behavioral testing.

Some of the important characteristics of black box testing are:

Suppose there is an online shopping e-commerce website. The functional testing of this website is an example of the black box testing technique. As a thumb rule, the tests do not bother about how the website works internally, which technology it is built on or how the web server works. In this testing method, tester only provides inputs to the website and verifies the output against the requirements. Some of the tests can be:

Following are the techniques of Black box testing:

This method divides input data in such a way that each group gets processed in the same way. As a rule, there should be there is a partition for valid and invalid data sets both. The tests should cover all partitions to cover the functionality of the product properly.

For instance, a printer accepts the number of copies from 1 to 100. If the input is less than 1 or more than 100, it shows an error. So the equivalence partition for this use case is:

Considering the example of the printer which accepts the number of copies from 1 to 100 from equivalence partitioning, boundary value inputs are

This technique comes into picture when there are complex business rules dictating the processing of the input. In this method, a table is created which shows all the inputs, business rules, and corresponding outputs.

For instance, to understand the decision table, consider the example of a simple login page which has 2 inputs user id and password and depending on these inputs output or error is shown: 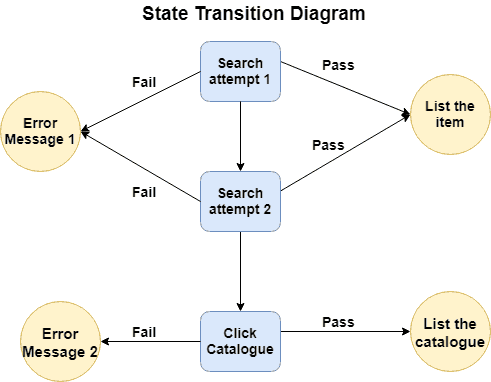 In this technique, test scenarios are derived from use cases. Use cases are the user requirements in their own language. Moreover, they include exceptional and error behavior as well.  Hence, this technique makes use of these use cases to derive the test scenarios. It’s an effective way of testing the system from its requirements or specifications.

Black box testing help improve the quality of the product by detecting functional and non-functional defects. Because it is not possible to cover each and every possible form of input, the black box testing techniques help in improving overall testing coverage. Although this method of testing does not require programming knowledge from the tester, one should have good functional knowledge of the product and domain for effective testing.