End to end testing refers to the testing of the functional and data flow of an application consisting of several sub-systems working together from its start to end. As we know, the software applications of modern days are sophisticated systems. Usually, they consist of several sub-systems working together each performing a definite task. At times, these systems are developed in different technologies by different teams or organizations. Finally, they come together to form a functional business application.  Hence, testing a single system would not suffice. Therefore, end to end testing verifies the application from start to end putting all its components together.

Definition of End to End testing

Why End to End testing

Difference between End to End and System testing

Process of End to End Testing

Like any other testing, End to end testing also goes through formal planning, test execution, and closure phases.

End to end testing is done with the following steps:

The tracing the quality metrics gives insight about the current status of testing. Some of the common metrics of end to end testing are:

While designing an end to end testing framework, we need to consider three important aspects. These are

User functions are the functions or activities a user can perform using the user interface of the application. As the end to end testing consists of real user scenarios, the first step is a list out what all user can do.

Conditions are the different set of input data and other dependencies like environment settings which can cause the functions to provide different outputs. Thus, the behavior of the function depends on its inputs and other parameters.

Test cases are the steps of doing the testing. Therefore, here we will make use of the above two steps, user functions, and conditions and come up with several different test cases. 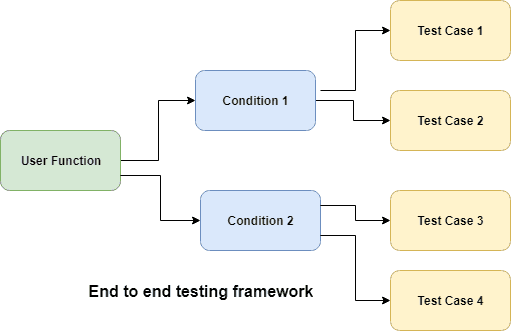 Example of End to End Testing

Let us take a simple example of an e-commerce web application. This application has:

Some of the examples of user functions can be:

For simple login user function, some of the conditions can be

Similarly, for other user functions like edit profile or checkout, there will be other corresponding conditions.

So a few of End to end testing test cases can be:

With new age software applications becoming more and more complex, thorough testing including all interconnected systems is necessary. Although the system under test can be working perfectly fine, other dependent systems may breakdown in a certain scenario to cause a failure. Hence, end to end testing comes to rescue verifying the entire application with all its interfacing components like other subsystems, network and firewall, servers, and databases.