You can read about Unit Testing

As we know, bugs can enter anytime into the system. In general, any minor glitch can lead to a deviation from the requirements. For instance, the two developers can understand the requirement differently. Therefore, their code will not adhere to the requirements when combined together. Hence, it is important to validate the behavior of software components when together.

What is Integration testing

Let us consider one example. Two developers Amy and Ben are working on a project to design a puzzle. Each would develop one side of the puzzle before the deadline. The player of the puzzle will combine the pieces to form the solution of the puzzle.

The output of Amy’s module :

The output of Bens module:

And hence the project was declared as failed. Any idea which step could have ensured the right output of their project?

Below is the typical Integration testing process of any project:

There are various techniques for doing Integration testing. Each integrates the individual components in a different fashion. In general, the testing technique selected depends on projects size, complexity, and timeline. 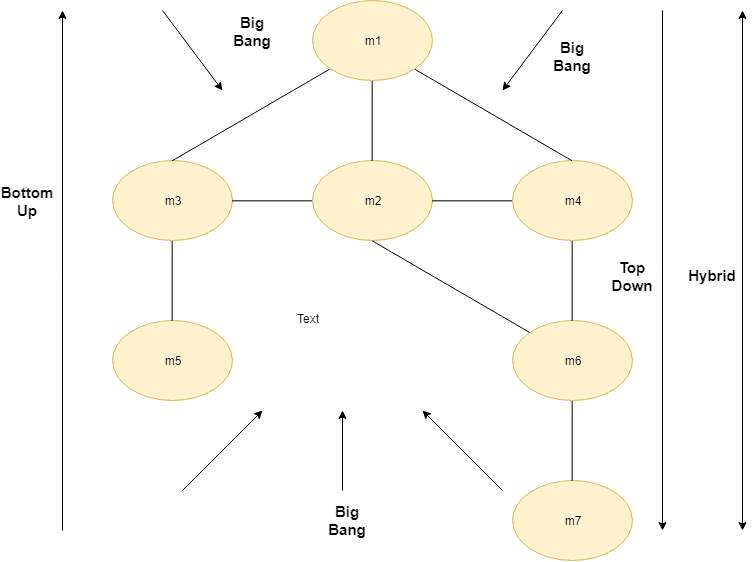 In the Big bang integration testing approach, testers integrate all the modules of the system together at once as a whole and then test the final resultant system. Quite often, there is a confusion between the system and integration testing but the objectives of both the testings are different. Integration testing targets the interfaces and links between modules while system testing validates the functionality of the entire software system.
The big bang approach is usually followed for smaller systems. For bigger systems, it becomes difficult to root cause the failures.

In the Top-down integration testing approach, the individual modules are combined from the top level of the hierarchy. At times, bottom level modules are not available. Hence, the stubs are used to simulate the input-output behavior of the lower modules which are not available for now. Stubs are nothing, but the programs which have hard-coded values to provide the input and accept the output to the modules which are under integration test.

For instance, we have Login page ready for the website but Home page functionality is not yet there. Therefore, a simple stub realizes the functionality of the Home page. When we test the Login page, the dummy Home stub program will be able to accept or reject logins for the test data.

In the Bottom-up integration testing, individual modules are combined from bottom to top level of the hierarchy. Although, it is also an incremental approach but exactly opposite of the Top-down approach. Basically, it starts by combining the lower level modules, moving upwards to the higher level modules.

Taking the example from the Top-down approach, now the Home page is ready for testing but the Login page is not available. Therefore, we will create a driver program to send the test login details to the Home page program and now test the Home page links.

The Hybrid integration testing approach combines Top-down and Bottom-up methodologies. It is also called Sandwich approach.  In Hybrid integration testing, the integration of modules begins from the middle layer. Then, the testing moves in the upwards and downwards directions both. It helps in faster testing of the module’s interfaces. At times, this type of testing uses both stubs and drivers as per the requirement.

Testers should test the software at every stage of its development. After components are unit tested, it is crucial to validate them when combined together and also the links between them. This article provides insight into Integration testing and its various techniques.