You can read about System Testing which we have covered in previous topics.

These test cases target to find out if the software meets the expected requirements for application’s response time, scalability and stability. Performance testing is also called Perf Testing. 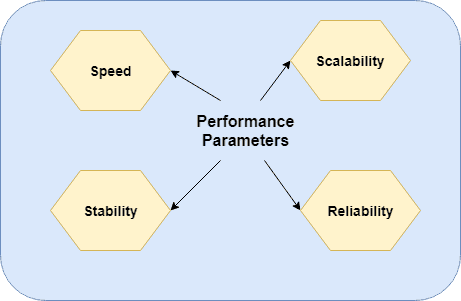 Why do Performance Testing

The performance problems to look for are like a slow running system, a system which takes more time to load and the one which hangs up at a particular function. Any of these issues can degrade the quality of the product and thereby the sales to a large extent.

Now that the goals are clear, the next step is how to achieve them. For that working out a test strategy is important. In the test strategy, we determine what is the scope of current performance testing phase. It also establishes what type of testing is required to fulfill the objectives and details of testing resources. The testing team comes up with the type and sequence of performance testings they are going to perform. Also, they select the tools they are going to use. Next, they evaluate the test environment which they will use.

After finalizing the test approach, the next step is to come up with a detailed test plan. The test plan is the document which guides the entire testing process. It enlists and analyzes in detail the testing schedule, test tools, and environment. It provides details of all the test scenarios of the testing and includes developments of test cases.

The analysis of test results happens after the completion of the execution phase. Total test cases passed and failed are evaluated. Testers prepare test reports with the details of the number of test cases covered and the test cases which are remaining. It shows the pass and the fail percentage. Testers present test results to all the stakeholders.

The test process is closed after evaluation of exit criteria. The exit criteria impose the percentage of test case execution and pass percentage, retest percentage. After the criteria are fulfilled, the performance testing phase is closed.

Performance testing is very much tool based. There are wide spectra of tools available in the market to help setup performance test cases. Some of the commonly used ones are:-

It is of utmost importance to test the system for its performance parameters. Without performance testing, a system is vulnerable to slowness, breakdown or bottlenecks during its work. No user enjoys working on a slow responding system. Similarly, the system which breaks in heavy loads can push its users away. Hence, performance testing should be part of the overall test strategy of the project to ensure a successful product.