Stress testing is a type of performance testing technique in which the software system is subjected to extreme load conditions to check its stability, robustness, error handling and recovery. It stresses the system beyond its normal capacity to reach its breaking point.  It is a Non-Functional intensive testing technique. In other words, in stress testing, the software system is monitored under extreme workload conditions for its behavior and stability.

It also evaluates the recovery of the system after breaking it. It establishes if the system was able to recover in an acceptable duration to its stable state. Further, it verifies the data robustness of the system as well. 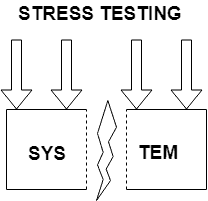 As stress testing targets to create random events for the system to measure its stability during the abnormal conditions.

How to perform stress testing

Firstly, the project’s performance requirements should be analyzed. These requirements are different from functional ones and dictate the scalability and performance of the system like maximum and minimum workload before breaking, response time and throughput.

Next stage is to plan for stress testing. The planning includes what is going to be the test schedule, environment, resources, and scenarios. The availability of resources is evaluated. The decision on exit criteria should also be made.

After deciding what test scenarios should be covered it is time to select the most suitable tool. The criteria to consider are cost-effectiveness, test case coverage, and the tool’s learning curve. The teams comfort level with the tool is important.

After all the setup, test cases can be executed. The tool can either generate the scripts for sending the load or QA team can write the scripts in the tool. These test scripts send the heavy payload and tool records applications behavior.

The QA testers and other stakeholders analyze the test results conformance with the performance requirements. Next, they identify the deviations from the benchmarks. The important test metrics under consideration for stress testing are

After the test result analysis, the bottlenecks are identified. Now the product is enhanced with environment settings, hardware or code changes to meet the performance goals and specifications.

Difference between Stress and Load testing

In the last article, we have read about Load Testing. You can go through if you want to learn more.

Stress testing is a common performance testing technique to check the product under extreme conditions. Stress testing verifies the system usage of resources, database, servers, error messages under extreme workloads which are beyond the normal capacity of the product.  It also tries to break the system and observes it during failure and recovery. Such exceptional situations can occur in the production environment. Hence, it is important to verify the behavior of the system in these scenarios so that nothing unexpected happens.